"The #1 place that folks mess up with systems thinking is distinction making. The repercussions can be quite serious."

For over ten years we've spent a significant amount of our time in the trenches researching how to effectively teach and learn systems thinking/DSRP and metacognition. We've worked in PreK-12 schools, undergraduate and graduate education, with research scientists focused on solving wicked problems, and with organizational leaders from the Silicon Valley to Washington DC to develop adaptive organizational design and leadership. One of the things we have consistently seen across these varied populations is the trouble folks have with making distinctions.

Here's 7 things you can do to make better distinctions:

1. Be aware that distinctions are beguilingly simple

The trouble folks have with distinction making is of two types, and they compound each other. First, making a distinction seems so simple. Look below, there. I just made one.

What do you see, a dot? You also see a not-dot. Alternatively you could see a white space with a hole in it. Whitespace and not-whitespace. There lies the problem with distinction making. It seems pretty easy, but even with something as simple as a dot, it can get complex and subjective pretty fast.

Because it is relatively simple to make Distinctions, and because we are making them all the time, people tend to believe there's not much to it. So they move on to the other rules of DSRP: part-whole Systems, action-reaction Relationships, or point-view Perspectives (they also fail to recognize that every S, R and P we make is also a D being made). So the first problem is that because people think distinction making is so simple, they pay little attention to it.

The second problem is that they don't see just how critical the identity-other distinctions they make are to the problems they are trying to understand and/or solve. The initial distinctions we make often decide the way an issue gets framed. These initial distinctions are in many ways the raw material of our thinking: the stuff that gets broken down or organized into part-whole systems, is related to each other, and makes up either the points or views (or both) of the perspectives we take.

Let me give you just one example. We introduce our graduate students to a fantastic case on whether or not San Diego County should build a $14 billion desalinization (desal) plant. The case is very detailed and requires quite a bit of quantitative and qualitative analysis. What I love about this case is how detailed it can be. We could spend a week or many more delving into the details, in a sense getting lost in the forest.

But the written case does some things in its first two sentences that frame the entire case, and many students gloss right over those sentences. The first thing the case does is frame the cause of the need for a desal plant: water shortage due to future growth. The second is that it frames the decision as a simple yes/no vote (a binary distinction between $14 billion desal plant or not).

Sometimes our initial distinctions are problematic, yet they persist as we delve deeper and deeper into the forest until we are totally lost. (That's why #5 below, entertaining the notion that our distinctions may be illusions can save us untold hassle and strife down the line.)

It turns out that the distinction "water shortage" could be flipped on its head to be called "people surplus." In addition, it is subjective framing to propose a yes/no vote on a $30 billion desal plant prior to comparing and contrasting other options. That's why #2 below--seeing the other--is so important.

2. Remember distinctions are boundaries not things

The first step in understanding distinctions is realizing that they are boundaries, not things. Most of us think that if someone makes a distinction they are isolating some thing and that that thing is the distinction. But this is not the case. The distinction is actually a relationship (a boundary) between the thing and all the stuff it isn't.

This is why the distinction rule in DSRP has two elements (as S, R, and P do): identity and other, or just (i-o).

Of course, there are other terms that are interchangeable with these elements. The table below provides some of them to illustrate how universal the concepts that underlie distinction making are:

The question of distinctions is complex. If we see a door in the image below, then the gray rectangle suddenly becomes not-a-door (or alternatively, a wall). The gray circle suddenly transforms into a doorknob. In this way, identity-other are like coupled oscillators of the mind--when we begin to see something as a door, our concept of the other things in the scene quickly adapts to that newly forming distinction. It happens lightning fast, but the dance between identity and the other is always helping us to form distinctions. And the distinctions we make matter.

3. Know that distinguishing boundaries is fractal

In the image below, we can see the typical use of distinguishing boundaries, where we decide what is inside and outside the "big" system.

What is important to remember, however, is that every act of identification of a thing or an idea, at every level of scale, is an act of distinguishing a boundary between that thing and the other things it is with. That is, all of the items in red below are acts of distinction making.

4. Think of identity-other as yin and yang

It may seem strange at first, but the way that things are defined is based on other things that they are not. We comprehend and evaluate candidates not in isolation, but in relation to other candidates.

The Zulu greeting, "Sawubona" means "I see you" and the response "Ngikhona" means "I am here." As always when translating from one language to another, crucial subtleties are lost. Inherent in the Zulu greeting and grateful response is the sense that until you saw me, I didn't exist. By recognizing me, you brought me into existence. A Zulu folk saying clarifies this, "Umuntu ngumuntu nagabantu," meaning "A person is a person because of other people."[1]

We understand the meaning of words, not innately, but by comprehending other words that are not that word. In fact, one of the best ways to deeply understand a new word is to understand it in the context of not only its antonyms, but also its closest synonyms (i.e., the things that are almost but not quite the same).

Take for example a word that may be unfamiliar to you, like pareidolia (parr-i-doh-lee-a). With any new word, we learn what it is (its identity or definition), but it also helps to know what it isn't. Of course, it isn't all the other words in the English language (like snow, fluffernutter, or crayons), but it also isn't its antonyms like truth and real. It also isn't the same as its synonyms. It isn't quite the same as a delusion but it's like it. Fantasy? Similar, but not the same. Figment of the imagination? Pretty close but not quite. In other words, pareidolia is defined not only by what it is but by what it is not. As we get to the terms that are almost the same but not the same as pareidolia, we get a more refined understanding of what it is. 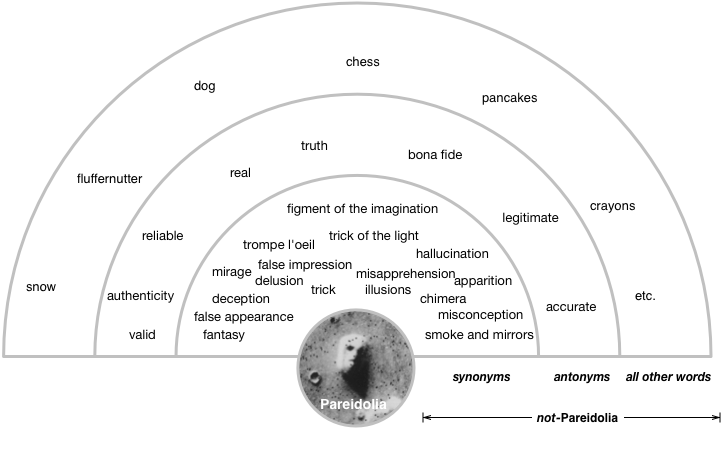 Pareidolia--is a psychological phenomenon involving a stimulus (an image or a sound) wherein the mind perceives a familiar pattern of something where none actually exists.[1:1]

First, a caveat. This is a suggested thought experiment. It is not to be taken literally.
But this thought experiement will help you to "play" with the distinctions you make and therefore be more prone to make the right ones. Here goes...

What if we treated every distinction we make as a pareidolia? 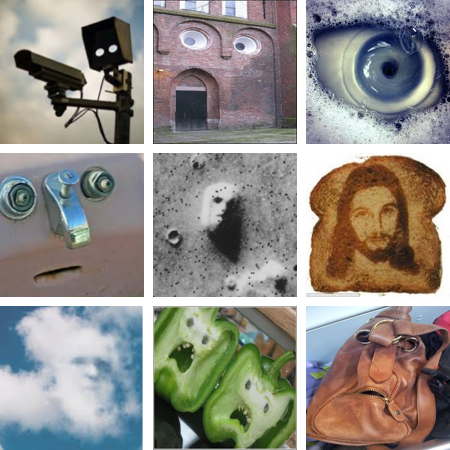 What if when we say sales and marketing, or when we frame something as a problem, or when we isolate a variable, or whatever, we pause for an infinitesimal moment of metacognition and ask ourselves, is that real, or is it a pareidolia?

That is, we question the veracity, validity, reliability, and truthiness of the distinctions we make.

When we play with distinctions and imagine that EVERYTHING WE DISTINGUISH could possibly be a pareidolia we avoid untold harm and pain.

6. Marginalize the other at your own peril

In 1964, American radio astronomers Penzias and Wilson were experimenting with a supersensitive antenna where all interference had to be eliminated in order to detect faint radio waves bounced off balloon satellites. They accounted for radio and radar interference and actually froze the receiver with liquid helium to eliminate interference from its heat. But they still found a low, steady, mysterious noise in their data. They checked and rechecked their equipment, removed some pigeon nests and droppings, but the noise persisted. They eventually realized that the noise was actually signal. Their accidental discovery of cosmic microwave background radiation was awarded the Nobel Prize for Physics in 1978.

Distinctions are not things but negotiated boundaries between ideas/things; a boundary between the identity and other that occurs fractally.

The key skill in distinction making is to ensure that you (and others) are not inadvertently framing things in such a way that you miss important things. When we make an identity, we automatically create a boundary that marginalizes the other. Sometimes this marginalization is trivial in its consequences, but sometimes it is egregious.

7. Distinction rule is designed to provoke thought, not provide an answer.

The value to keeping the Distinction rule in mind is that the structure of the rule provokes us to be more metacognitive about the distinctions we are making. It doesn't prescribe or provide an answer, it simply tells us to pay attention to the other as we go about making identities (e.g., labels, names, concepts, recognition of things) 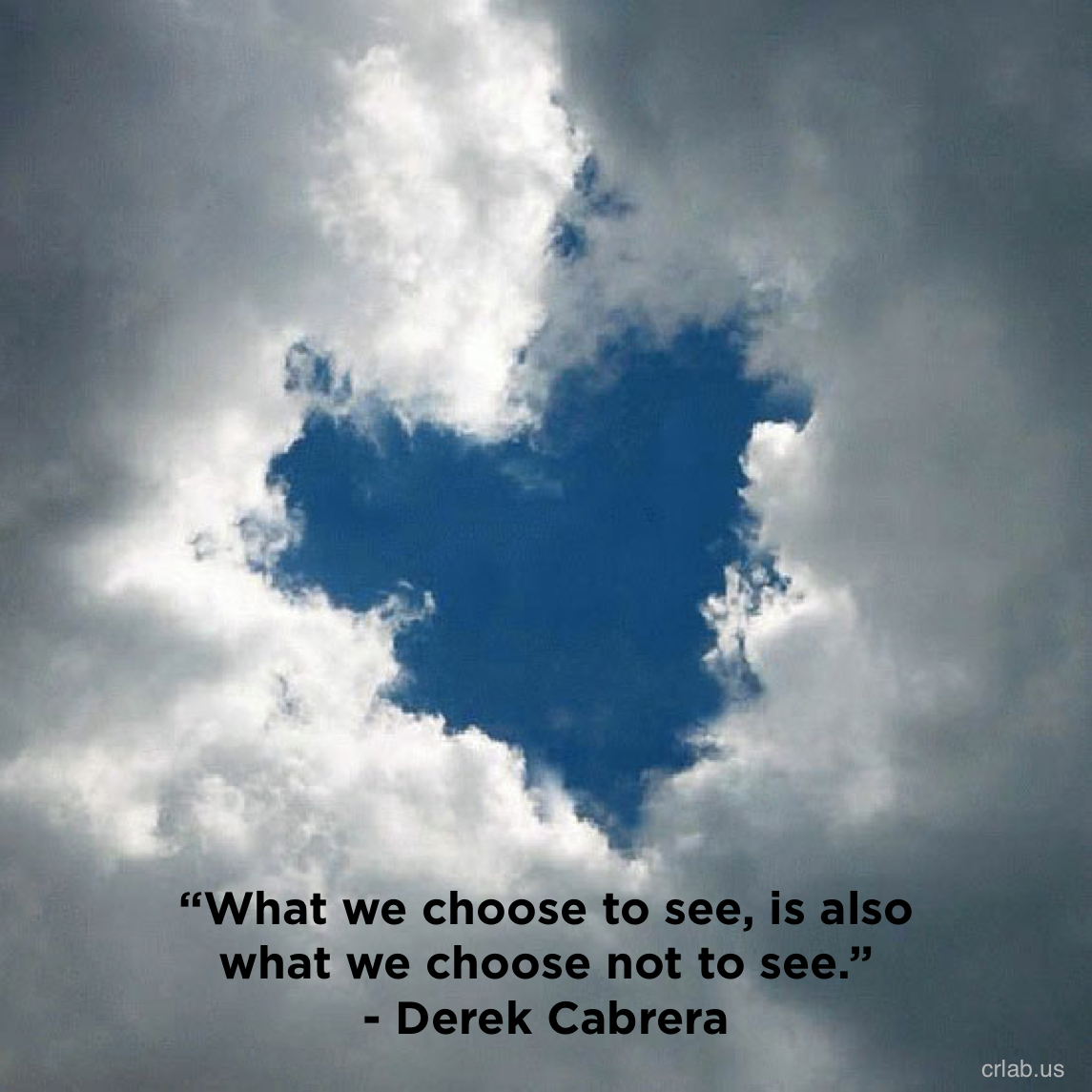 Whether we choose not to marginalize the other because it is an ethical stance (i.e., the right thing to do) or because it helps us be more analytically complete or wildly creative, distinction rule tells us:

So, whenever you're making distinctions, be sure to keep a mental table of what you are doing and consider the alternatives.