Excerpt from the book: Systems Thinking Made Simple, Chapter 5

This blog is part of a set of blogs under the tag "cognitive jigs."Be sure to check out the tag to read them as a group and learn how cognitive jigs are at play in our everyday lives.

A “Barbell” gets its name for obvious reasons. The basic structure—two ideas or things and the relationship between them—looks like a weightlifting Barbell. All parts of maps that show a relationship between two ideas are referred to as a Barbell, but there are simple and more complicated Barbells. Figure 5.27 shows the simplest Barbell is content agnostic so it can be used and reused for any information or topic. Remember from Chapter 3 (see Figure 3.15) that we use arrows to signify directionality. 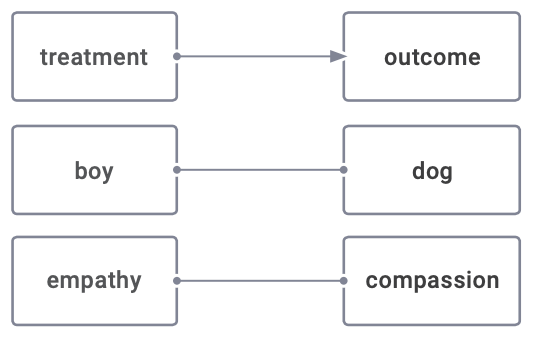 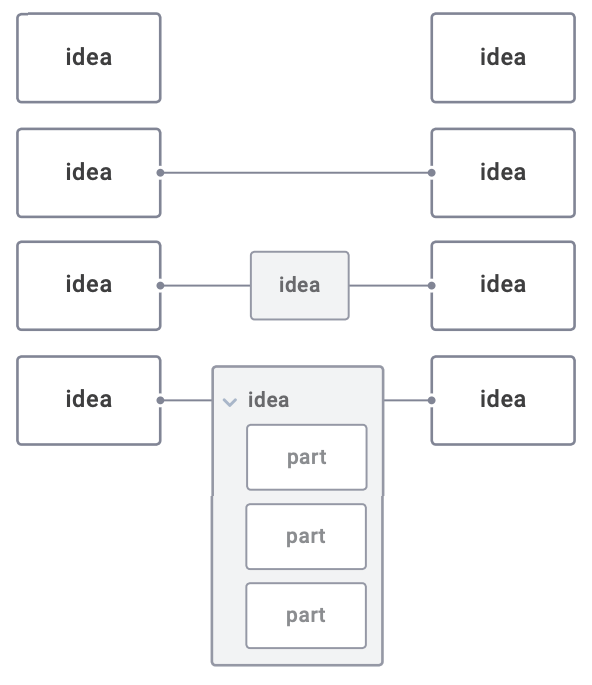 Figure 5.28: The Steps of an RDS Barbell

RDS Barbells are extremely important jigs because much of the mystery and complexity of wicked problems is hidden in the interrelationships between ideas or things. RDS Barbells guide us toward identifying and deconstructing this complexity.

Figure 5.29 shows that the same RDS Barbell can be used for feedback loops. 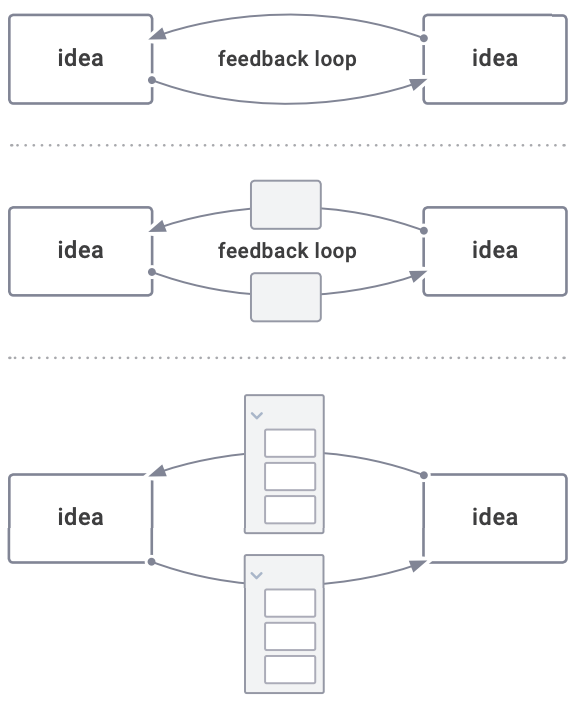 We sometimes call RDS Barbells algorithms for innovation because they can be powerful ways to generate new ideas. There's a saying that there are really only three ways to innovate: (1) invent something totally new, (2) make an existing product better, or (3) combine two existing things into something new. For example, RDS Barbells illustrate the innovation process needed to think of quick-marts (the relationship between a gas station and a food market) and biochemistry (the interdisciplinary relationship between biology and chemistry).

RDS Barbells are useful any time you want to relate (d) parts (b and c), allowing you to explore that relationship even further. Figure 5.30 illustrates that an RDS Barbell can occur anywhere, even as parts to a whole. 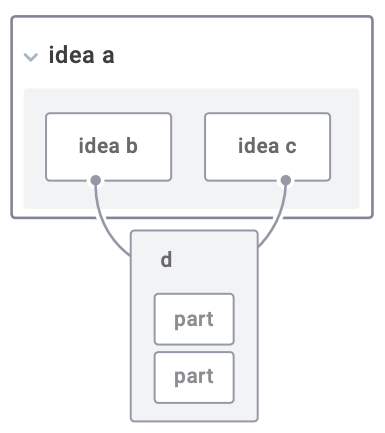 Figure 5.30: RDS Barbell as Parts to a Whole 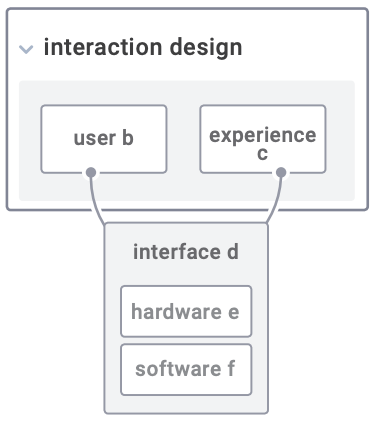 Or consider the same jig structure in Figure 5.32, which illustrates a doctoral dissertation (a) consisting of the relationship between non-marital births (b) and the 1996 Welfare Reform Act (c). This relationship was found to be correlational (d) based on two parts, mediating variables (e) and legislative provisions (f ). 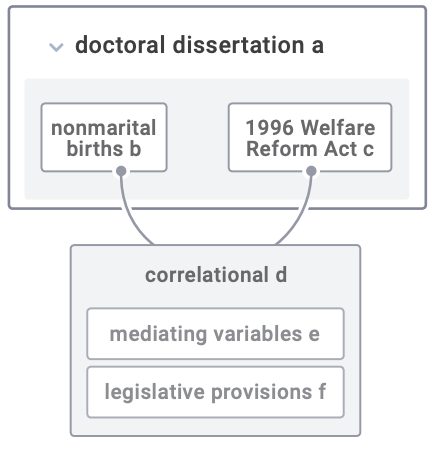 Mapping of more complex systems is accomplished simply by stringing jigs such as directional Barbells, RDSs, and R-Channels together. We can also position things in different ways to create relationships between more than two ideas, as in Figure 5.33. 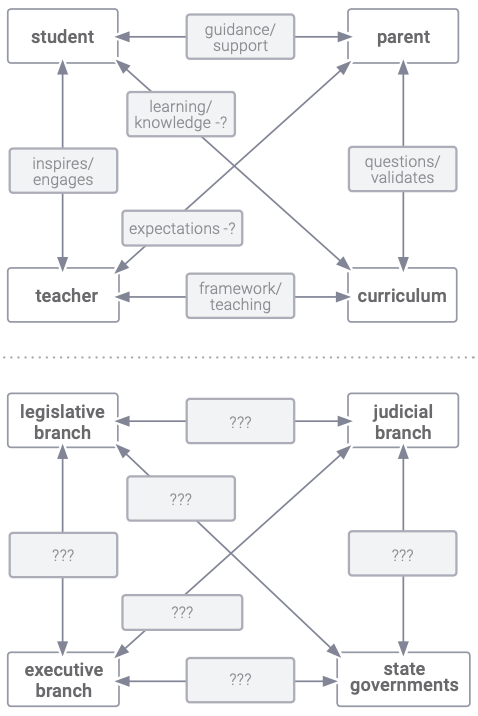 The examples in Figure 5.33 illustrate Barbells strung together. The content examples include deconstructing the interrelationships between four parts of government and between student, parent, teacher, and curriculum.

Note that a “?” shows that maps can be used equally to organize known information, and to generate new information as part of the teaching and learning processes. Take a minute to think about how you would label the relationships marked with a “?”.

The level of complexity that can be modeled is effectively infinite. Figure 5.34 illustrates how RDS Barbells can be nested inside of RDS Barbells. The point is that DSRP simple rules and jigs can expand your systems thinking. Be creative! 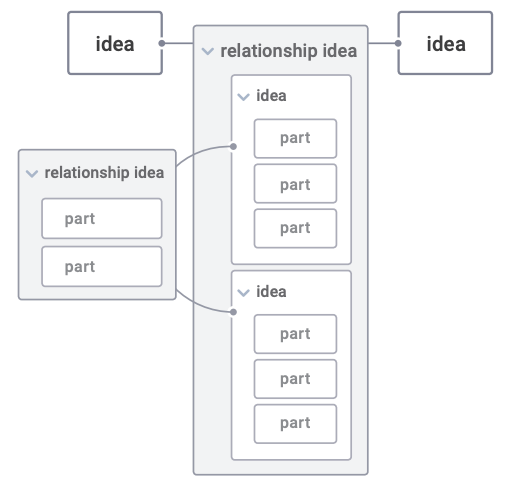 Want to play with some interactive resources? Check out these Jig Maps: 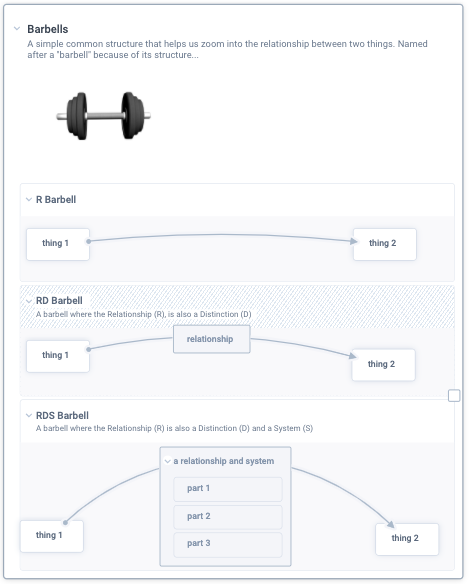 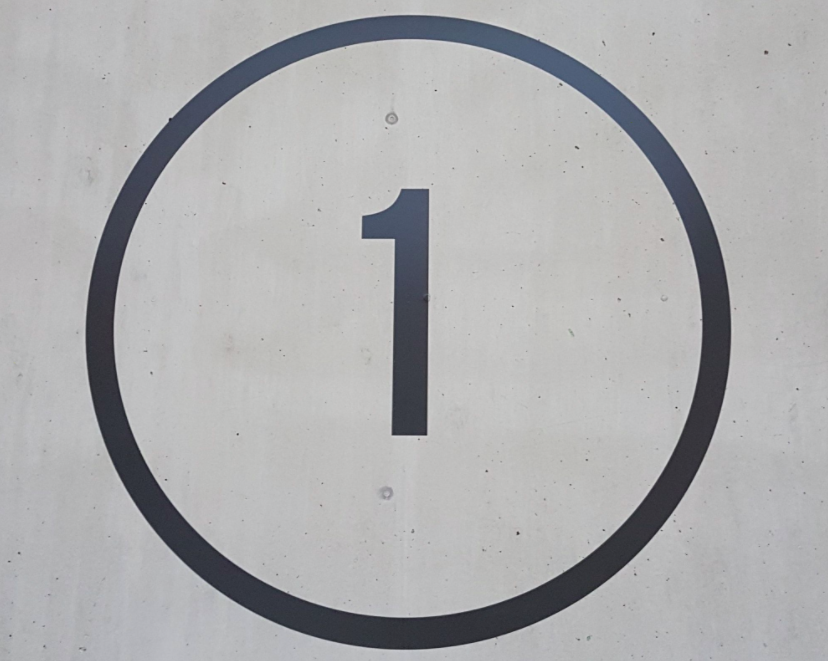 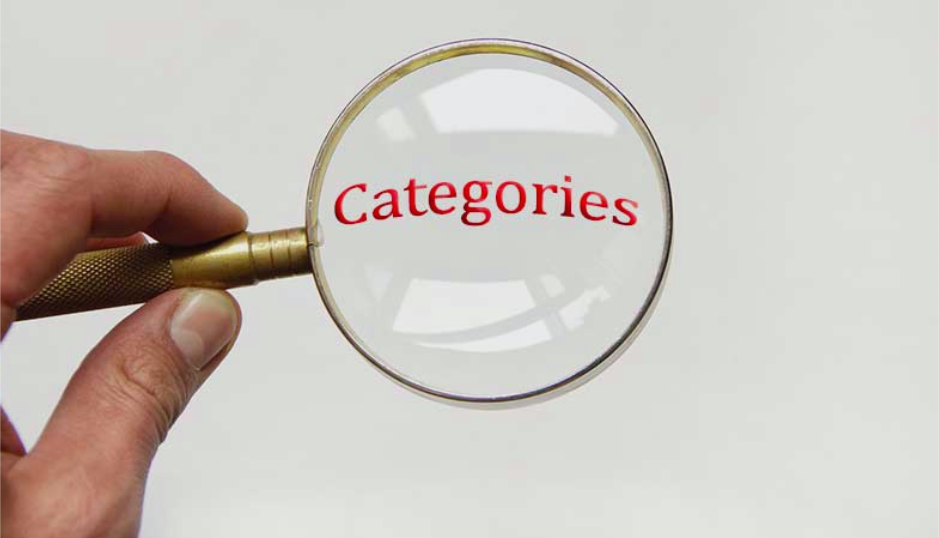