This post is an excerpt from Flock Not Clock: Chapter 1.

Second, we need a command structure.

Everyone loves hierarchical trees, so let’s use them. In fact, when you really want to understand an organization and how it works, simply ask to see their organizational chart, or “org chart” (see Figure 1.8). That is the best indicator of how things work in an organization. Because everyone knows that if your boss asks you to do something you definitely do not want to do, or that you disagree with, there is always a way to manipulate or otherwise obfuscate in a way that effectively means it won’t get done. 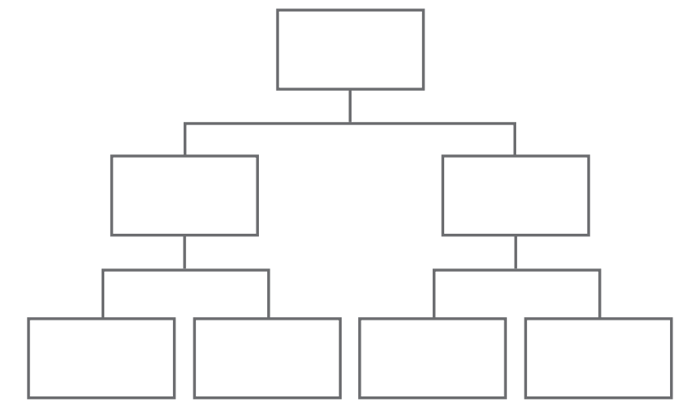 The org chart indicates who is who's boss, who reports to whom, who to see if you have a problem. The truth is it’s bunk. It’s not how organizations work. Sure, bosses can delegate, hire, and fire, tell employees what to do and, to some degree, use hierarchical power to get them to do it. But it’s also true that employees can stall, drag their feet, ignore, play dumb, play dead, or raise Cain. Direct reports can— and more often than not, do—make the ultimate decision on what they do. If they have to do something, they can decide to be strategically compliant rather than authentically engaged. They are in charge of how well it gets done. None of that is captured in an org chart. Yet that kind of stuff constitutes 90% of the workweek. 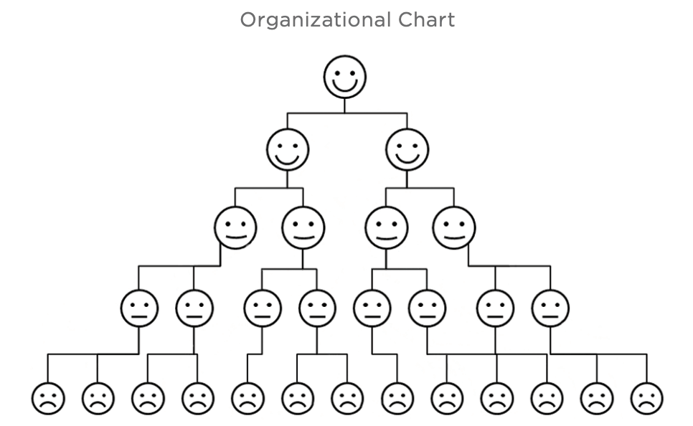 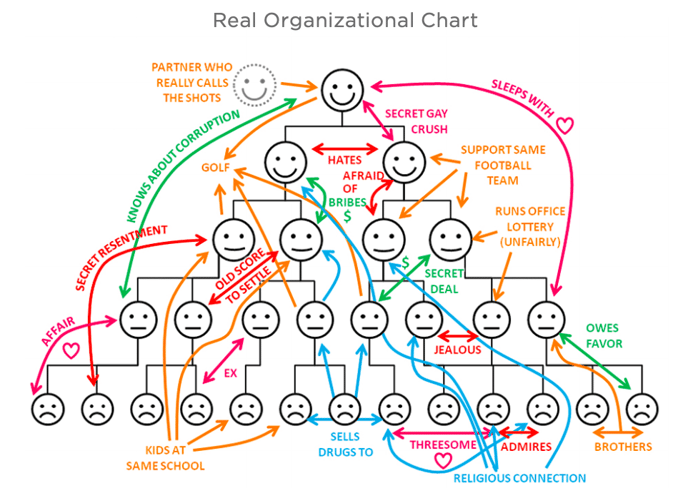 This view of the “real organizational chart” is funny, but in a potentially tragic kind of way. The effects of such a model on an organization can be devastating. When we think of an organization in a simplistic hierarchical way (the mental model on the left) it affects our decisions, behavior, and execution. We believe that things can be done in a top-down (or bottom-up) kind of way. In reality we should be doing things in a networked kind of way, taking into account the influencers and influences that dynamically affect outcomes. When we think our organization is a certain way, we behave as if it is that way. Worse still, when reality offers us feedback—the lifeblood of survival itself—we misinterpret the feedback because we run it through our mental model of how things are. The effect is that we are a biased buoy at sea, riding the waves in a chaotic fashion, but thinking the waves must certainly have it out for us. We get things wrong, we believe strange things, we become organizational witch doctors.

Why not create a different mental model of an organization—one that better reflects reality? An org chart tells us that our organization looks and acts like a command-and-control hierarchy, when in reality organizations look and act like dynamic social networks (Figure 1.9). In a social network, the nodes (things being connected) are people and the connections (lines) are the relationships between people. The people with the most and highest quality relationships are the most connected, and therefore the most influential in the system. Let's call this the relationship-value (or R-value) of a node. Notably, the thing that we call command and control or hierarchical influence is in actuality the relational influence of the people in the network. So what we should be looking at in our organizations is people and their R-values, or the influence they have on the system. 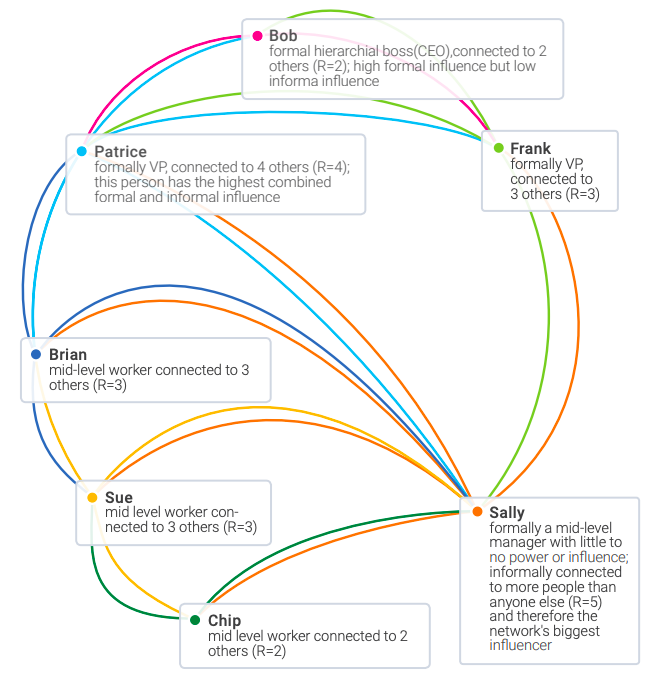 In healthy organizations, the people with the highest R-values are also the people located near the top of the hierarchy. The stated leaders are the actual leaders. For example, a boss is at the top of the hierarchy because she has more influence, more knowledge, knows more people, has her hands in more processes, and is a part of more initiatives. She’s more knowledgeable because she is, and has been, more connected. That’s not to say that command-and-control hierarchies don’t or can’t work. But if you want an adaptive organization, command and control doesn’t work. The reason why in the simplest terms has to do with communications and time. Simply put, when something occurs on the ground, the employee needs to respond to it immediately for the organization to be adaptive. In the case of the customer, this is critically important. But if employees have no authority to think or are not incentivized or rewarded for thinking, then they have to go check with higher-ups, sometimes through several levels of command and control. The time it takes for the message to travel up from the employees in the field to the organization’s “central nervous system” and then back again kills any hope of a responsive, timely interaction on the ground.

We see this in complex systems in nature. There’s simply not enough time to have leaders tell us what to do because leaders can’t be everywhere at once. Or can they? What if everyone is given a leadership role in the organization to make decisions locally based on simple rules rather than hierarchical command and control? The org chart mental model versus the social network mental model is important for other reasons. First, the org chart model assumes that people are extrinsically (externally) motivated. What is more likely true is that people are semi-autonomous, somewhat selfish, independent social agents with their own set of extrinsic and intrinsic (internal) motivations. If what the boss is demanding aligns with those motivations, then there is compliance, but if not, the behavior you’ll see is false engagement such as strategic compliance, ritual compliance, retreatism, or rebellion.

An employee is strategically compliant when they do what you ask of them for their own strategic interests, which means that as soon as their interests are out of alignment with yours they will not comply. This demonstrates the problem with org charts—they give us the false sense of employee interests being aligned with organizational values. Ritual compliance is when a person complies because they are accustomed to doing so; that is, complies out of habit. That might work for turn-of-the-century factory workers, but not for workers in today’s knowledge economies. Today, many jobs require authentic engagement and thinking—even on the assembly line because the tasks, although routine, are highly technical.

Retreatism occurs when a person disengages either physically or mentally, reducing productivity. He shows up and collects a check. Rebellion against the instructions can be either active or passive. Active rebellion is more obvious: for example, storming out of a meeting or refusing to do a task. Passive rebellion is more popular, such as resorting to subversive behavior that can be extremely damaging and costly to your organization. In short, the org chart fails to capture the details of how organizations (and the people who constitute them) actually work. Never before has this been more true than in the current, dramatically changing business climate. Some will argue that command-and-control hierarchies have worked for centuries. And they would be right... sort of. In factory or industrial labor situations, command-and-control hierarchies look like they work because there is more strategic and ritual compliance based on differentials in power and limitations on available choice. But today in market sectors where people shop for workplaces like they shop for the best deals on consumer goods and where hiring the best talent is the crux of organizational success, the best employees have more choices. In addition, in the knowledge age, workers are more educated, more savvy, and more empowered to act upon their own interests. This means that today’s org chart mental model is more fiction than fact.