14 Aug 2015 • 5 min read
All images credits from STMS[^n]
I mentioned in a previous [blog](http://stdaily.ghost.io/what-are-the-patterns-that-connect/) that systems thinking itself is a complex adaptive systems (CAS) and that underlying systems thinking are four simple rules: making distinctions and recognizing systems, relationships, and perspectives (see [DSRP primer](http://stdaily.ghost.io/dd/) for more on the four rules).

In this blog I'd like to explore a bit more what we mean when we say CAS and also how systems thinking is a CAS. The crux of understanding CAS is to understand the intimate relationship between simplicity and complexity, which I explore a bit more further on. There are countless examples of CAS such as ant colonies, traffic, weather patterns, and the stock market. There are a few examples that are more familiar to us that illustrate the deep connection between simplicity and complexity, such as the rainbow of colors, biodiversity, karate, lego, and chess.[1]

CMYK : Color An infinite array of colors can be constructed from just four: cyan (a shade of blue), magenta, yellow, and black--what printers and designers call "CMYK".

ATCG : Biodiversity The amazing biodiversity on earth (from a starfish to an aye aye to a human being) derives from four nucleotides: adenine, thymine, cytosine, and guanine (ATCG). These are the four organic molecules of DNA. Charles Darwin in The Origin of Species wrote, “from so simple a beginning endless forms most beautiful and most wonderful have been, and are being, evolved.” He only had an inkling of what we would later discover to be the hand of DNA, but his mindset was one of simplicity and complexity. Underlying all of the complex and adaptive biodiversity of life itself is simplicity.

4 Simple Moves : Karate In one of our favorite scenes from The Karate Kid, Daniel-san has asked Mr. Miagi to teach him karate and all he seems to be doing is hard labor and household chores around Mr. Miagi’s property. After being upset, Daniel-san eventually realizes he has been taught four simple movements that underlie all of the strikes, kicks, and blocks that make up karate. Mr. Miagi is not only a Karate-master, he is also a master teacher. He knows that to achieve the outcome Daniel-san desires, his student will need to be able to adapt to the unpredictable future of bullying, fights, and competition. To prepare him for such an unpredictable future, rather than teaching him a laundry list of moves, Mr. Miagi focuses on the simple underlying fundamentals that can be combined and recombined: wax on-wax off, paint the fence, side to side, and sand the floor. These four simple rules combine in an infinite number of ways to develop Daniel-san as an adaptive, robust, and resilient fighter.

Simple LEGO Bricks : Anything In 1947, Ole Kirk Christiansen got samples of a plastic brick invented and patented (“self locking building bricks”) by Mr. Hilary “Harry” Fisher Page in Britain, and began creating the automatic binding bricks which we know today as Lego Bricks. Ole’s 1958 Lego patent (#3005282) states, “the principle object of the invention is to provide for a vast variety of combinations of the bricks for making toy structures of many different kinds and shapes.” And that was the magic of Lego—vast variety from simplicity. Anything imaginable could be built. All kids could unleash their creativity on the world with simple, modular, relational blocks.

6 Unique Pieces : Chess With just 6 unique pieces (sixteen total per side) and a simple set of local rules, perhaps nothing captures the complexity-simplicity paradigm better than chess. It is revered as a complex game, causing us to bestow grandmasters with the title of genius, yet it is a game a child can learn to play at an early age. Built on autonomous agents following simple local rules, chess’s potential for complexity is immense. The seemingly simple moves of chess combine into staggering mathematical possibilities. For example, there are 318 billion possible ways to play the first four moves. There are 1.7 x 1029 possibilities for the first 10 moves. The longest game of chess that is theoretically possible involves 5,949 moves. The longest actual chess game ended in a draw after 269 moves and 20 hours and 15 minutes of play.

DSRP : Systems Thinking We can add one more simple-complex system to our list: systems thinking. Despite the fact that systems thinking can take a diversity of paths about nearly any topic, problem, or phenomenon, it is built on simple rules: we make distinctions, we recognize relationships, we break things down or combine them using part-whole, and we take perspectives. 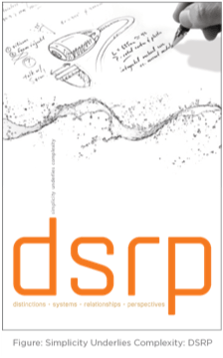 Secondly, it is also hard to grasp because when we see complexity, we tend to assume that it derives from complicated rules and processes. When we see a really complex, adaptive, robust, system (a CAS) we don't typically think:

"all that complexity must be coming out of really simple rules"

We don't think that...unless we are complexity scientists, who after much analysis have concluded that: CAS emerge from simple rules. That underlying complexity, there is simplicity.

Murray Gell-Mann is one of the greatest minds you've probably never heard of. His scientiﬁc achievements include decades of innovation; he gave us insight into the quantum world, for which he won a Nobel Prize. Gell-Mann, along with other great minds, founded the Santa Fe Institute for the study of complex systems (SFI), which has signiﬁcantly advanced the ﬁeld of complexity science. In his description of complex adaptive systems, Gell-Mann suggests that the feedback loop between our mental models and reality is the driver of not only individual learning and thinking, but also that of cultures, organizations and societies. In short, the survival of everything you care about--your family, education, governments, and society as a whole--relies on this feedback loop between mental models and reality.

So, what do we mean then that our systemic thinking is both complex and simple? It means that the process of systems thinking is based on simple rules despite the fact that the outcomes may be terribly complex. Gell-Mann explains it this way (emphasis his):

What is most exciting about our work is that it illuminates the chain of connections between, on the one hand, the simple underlying laws that govern the behavior of all matter in the universe and, on the other hand, the complex fabric that we see around us, exhibiting diversity, individuality, and evolution. The interplay between simplicity and complexity is the heart of our subject.

It is interesting to note, therefore, that the two words are related. The Indo- European root *plek- gives rise to the Latin verb plicare, to fold, which yields simplex, literally once folded, from which our English word “simple” derives. But *plek- likewise gives the Latin past participle plexus, braided or entwined, from which is derived complexus, literally braided together, responsible for the English word “complex.” The Greek equivalent to plexus is πλεκτος (plektos), yielding the mathematical term “symplectic,” which also has the literal meaning braided together, but comes to English from Greek rather than Latin.[1:1]