S to P Jig: The Jig ALL Frameworks Were Built Upon

Staff: Tell me about the jig you call, "S-to-P Jig?" What is it? And, why is it such an important jig?

Dr. Cabrera: S to P jig really is a doozy. It is a jig no one has ever heard of but everyone has used many times. In fact, every single framework that has ever been built—so examples include SWOT Analysis, Bloom's Taxonomy, Maslow's Hierarchy, Design Thinking, the 7 Habits, and literally 100s of thousands more—was built on S-to-P Jig.

What S-to-P jig tells us is that you can build a system (some collection of inter-related parts) that gives you some clarity on some phenomena and then you can transform that system into a perspective to look at some other system/phenomena. In fact, we can see the same implication in the word "framework" —some thing we use to frame whatever work we are doing. That's what S-to-P jig is.

Dr. Cabrera: The most basic S-to-P jig is some listing of parts of a whole used as a perspective on some other system of parts. You can see this in the S-to-P Jig map as it is much easier to see than to describe in words. [see map below]

Of course, a lot of the time, the S-to-P jig utilizes a more complex starting point. So, step 1 is to create your system of understanding which might involve any DSRP structures, say a bunch of interrelated parts like this [shows map below] ... 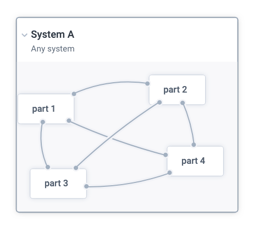 And then step 2 is to use that system as a point-of-view on some other thing (a system, situation, phenomenon, etc.)... [shows map below]

That's the basic idea. It is a very simple but profoundly useful Jig.

Staff: That is cool. Can you give me a real-world example?

Dr. Cabrera: Sure. For example, you might not even start out wanting to use the S-to-P Jig. It might be something you evolve into or an afterthought. You might start by wanting to understand why refugees radicalize (into terrorists) and what the research says are the best strategies for decreasing refugee radicalization. You might research the issue and create a systems map in order to better understand it. Often, the best systems maps are "compressible" meaning we can expand or contract them. So, say that you come to the following systems map—this one informed by a vast amount of research—on why refugees radicalize and how to decrease radicalization in refugee situations. [shows map below]

There's a lot in that map, but we can compress it down to another simplified map that captures the essence of this complexity. It looks like this one here: [shows map below] 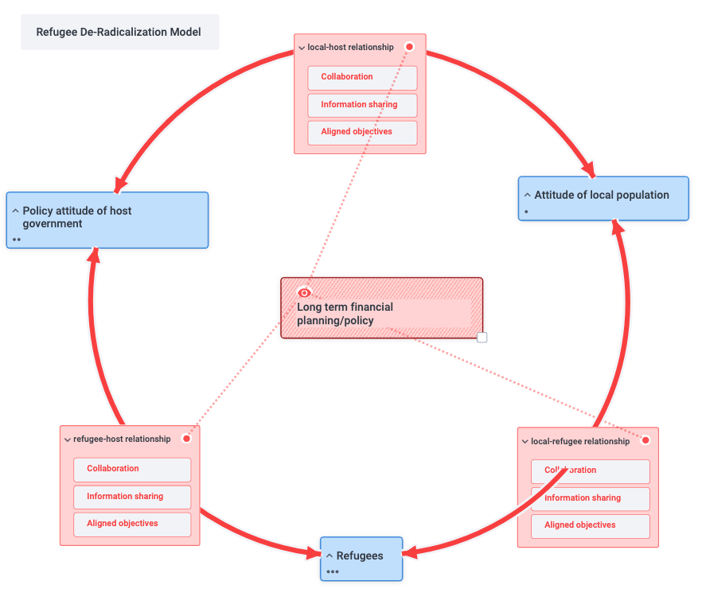 What this map says is that the research shows that when you focus the long term financial planning and policy on three areas (collaboration, information sharing, and aligned objectives) between three entities (refugees, local population, and host government) you will decrease the factors that lead to refugee radicalization. This is a powerful map (a DSRP system of interrelated parts) for understanding the issue of refugee radicalization. And you could stop right there and benefit from this understanding. Full stop.

But S-to-P jig shows you a simple trick that you can use to take the utility of this understanding further. It says that you can take that map (that "system" or mental model) and use the whole thing as a point-of-view on some relevant situation, system or phenomena (say, in this case a refugee camp). You would use the whole map on the left side as a looking glass into the map on the right side. And, each of the parts of the map on the left become their own point-of-view, too. 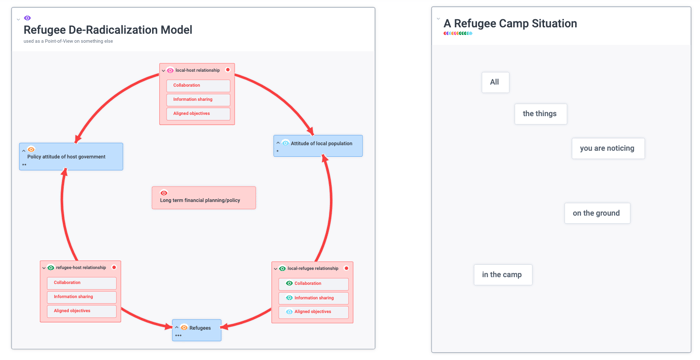 You can imagine, if I was the guy tasked with decreasing refugee radicalization in a new refugee camp I would use this as my tattoo model.

Staff: What is a tattoo model?

Dr. Cabrera: I'm sorry. A tattoo model is an expression I use which Laura always tells me not to say because she doesn't want our students getting tattoos because I told them to.  In any case, a tattoo model is a model that is so operationally important that it's almost something you would want to tattoo on your arm. Wouldn't that be cool! A tattoo of a mental model on your arm! In any case, it's a metaphor. Or at least—so I don't get in trouble with Laura—use Henna or one of those quarterback sleeves or something. It just means that the the "S" in your S-to-P Jig is so important that its tattoo-able.

Again, if I was the guy tasked with decreasing refugee radicalization in a new refugee camp I would have this model be my modus operandi. It would be the lens I use to look at the situation on the ground. It would be the litmus or rubric against which I evaluated progress. It would be the perspective from which I viewed the camp. That's how powerful an S-to-P Jig can be.

Staff: That's a powerful use case. Is there anything else we should know about the S-to-P Jig.

Dr. Cabrera: Well, no not really. Other than that all the frameworks in the world are examples of S-to-P Jig. The guy that invented SWOT Analysis, for example, just created a model that he thought you should use as a perspective on your business or policy. The guy that invented SD, SSM, Design Thinking, etc. Those are all frameworks that one uses like an S-to-P Jig. The point I make to my grad students is this: none of those existing frameworks are going to help you with your problem, because if you have been tasked with a problem or policy that is one people haven't solved yet, because it's a wicked or tough. So, it isn't going to get solved with one of these off-the-shelf solutions. You'll need to machete your way through the jungle. You'll need to create your own model or framework just for this problem. That is why DSRP is so powerful, because it allows us to create anything and adapt to any situation on the ground. Every problem requires its own unique model. We had a brilliant student, Jess Sokolow who wrote about the Flint Michigan Water Crisis. She came up with a brilliant model of what went wrong there. Again, she just wanted to understand what went wrong. But that model she came up with could be used as a point-of-view on how to devise policies and actions steps for getting it right in Flint and in lot's of other places.

Staff: Thank you. That was really helpful. I learned a lot.

Want to know more about DSRP and Jigs, read Systems Thinking Made Simple 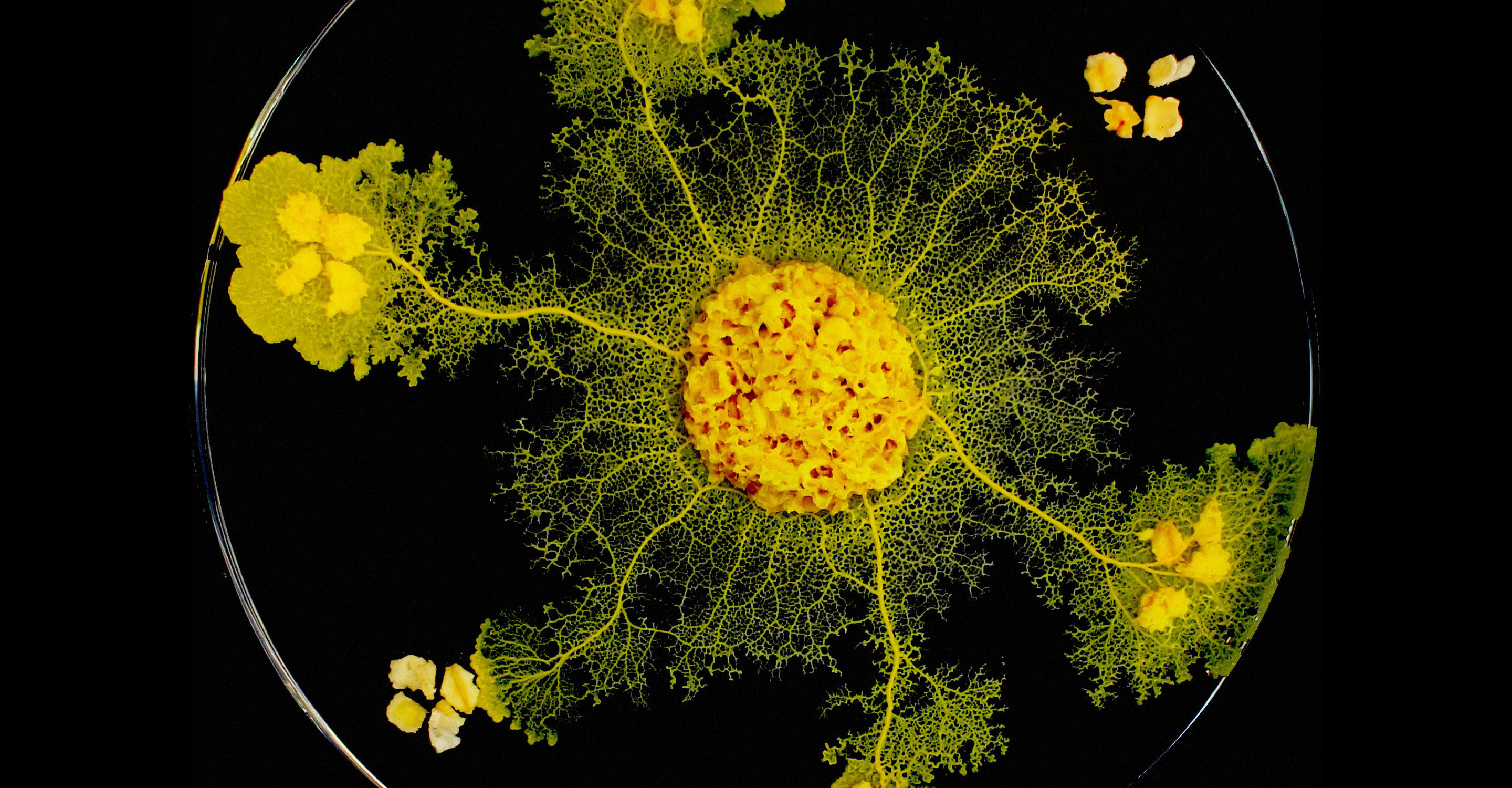 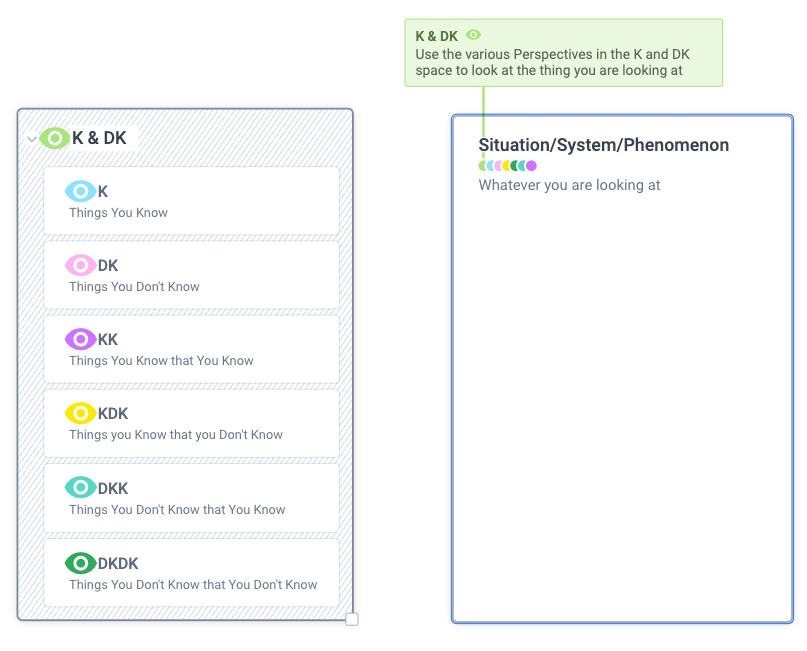